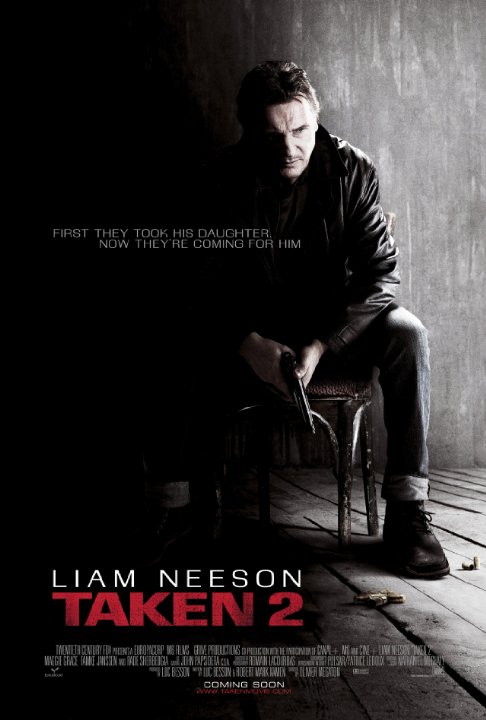 After the enormous success of Taken (2009; dir. Pierre Morel), which raked in $226.8 million worldwide on a $25 million budget, it was inevitable that we would get a repeat performance.  And a repeat Luc Besson and his cavalcade of writers gave us.  Taken 2 attempts at a continuous narrative, but it is ultimately a game of thematic repetition which the film hopes you won’t notice.  On the surface, this is fine, since the series identifies its theme anyway, but one must wonder how a world in which someone like Bryan Mills (Liam Neeson) exists can continue to operate.  After all, Bryan is an uncompromising murderer who cares little for international law.  Indeed, he cares little about anyone outside of his personal circle, as becomes clear to us in his oft-quoted speech:

I don’t know who you are. I don’t know what you want. If you are looking for ransom, I can tell you I don’t have money. But what I do have are a very particular set of skills, skills I have acquired over a very long career. Skills that make me a nightmare for people like you. If you let my daughter go now, that’ll be the end of it. I will not look for you, I will not pursue you. But if you don’t, I will look for you, I will find you, and I will kill you.

Bryan’s interest in ending the practice of sex trafficking only extends as far as his family, leaving the handful of lines in Taken 2 about the crimes of Marko (Arben Bajraktaraj), who Bryan tortures to death in Taken, somewhat hollow, and Bryan’s conversations with Marko’s father even more so.  Who holds the moral high ground when neither Bryan nor Marko’s father, Murad Krasniqi (played by Rade Serbedzija), has any interest in ending the system which made Taken possible?  Unfortunately, the film suggests that the answer is Bryan, as he is the lone American in a sea of Muslim villains.

Still, there’s much to be enjoyed about the crafty Bryan Mills and his violent, well-choreographed battles.  For action lovers, these films must be a treat, because they are structured around the buildup to what almost amounts to a 45-minute battle scene, with brief interludes to give us, and the characters, a little breathing room.  In Taken 2, the 30-minute buildup centers once more on Bryan and his family.  Having saved his daughter Kim (Maggie Grace) from Albanian sex traffickers, Bryan still struggles with being a good father who happens to have been a CIA operative.  Now, that struggle comes head-to-head with the age old fatherly fear:  daughters learning to drive and daughters getting boyfriends.  Unlike in Taken, however, Bryan’s obsessiveness in Taken 2 is treated as a little overbearing, but forgivable, and it’s that forgiveness, it seems, which sets up the film’s second family-oriented subplot:  Lenore’s (Famke Janssen) failed marriage with Stuart (not present) and the obvious implication that she and Bryan will rekindle their romance.

On the other side of the world, however, some families are not rejoicing.  As to be expected, a large number of the people who Bryan killed in Taken had families; they are shown here briefly mourning their dead sons.  Marko’s father, however, wants revenge, hatching a plot to capture the Mills family and make Bryan suffer for his “crimes.”  As the Mills family gear up for Kim’s driving test and for a happy trip to Istanbul, per Bryan’s suggestion, Murad and his men travel to Paris to torture Jean-Claude (Olivier Rabourdin) for information, pay off random authorities, and eventually set up shop in Istanbul.  As to be expected, the Mills family walk into a trap, resulting in a one-man war as Bryan attempts to put his family back together again…with his fists, guns, and cars.

I saw the first installment in theaters back in 2008 on a whim.  At the time, and upon repeat viewings, I thoroughly enjoyed it, viewing Neeson’s gritty parade of action antics as a welcome reprieve from everyday life.  It was an uncompromising revenge flick which could be enjoyed for its intense, unambiguous violence rather than consumed as a commentary on the same.  The kind of film you could lose yourself in; the antithesis to the Bourne films.

But as I watch the Taken films, I am struck, and perhaps flabbergasted, by the way in which they frame Islam.  In Taken, Besson and his fellow writers dispense with any sort of ambiguity by presenting an almost voiceless caricature of an sheikh — old, fat, and of lascivious taste.  Indeed, the film removes his voice not simply because he appears only briefly at the end of the film, but also to reinforce his exoticism.  Unlike the mixed European and American criminals who appear to run the entire operation, the sole “ethnic” Muslim and his entourage are outsiders who mostly do not speak for themselves and serve the narrative by being killed in what is almost a purification gesture within the film’s “world.”  That the Albanian criminals which provide the sheikh a service are also coded as Muslims  — and outright identified as such in Taken 2 — further reinforces the divide between Europe proper — i.e., Western Europe — and what Neil Smith (Total Film) identifies as “Eurotrash.”

Taken 2, however, attempts to rectify the almost bigoted portrayal of the Muslims by setting the story in Istanbul, Turkey.  Here, the Albanian sex traffickers are once more seen as outsiders, as they were in Taken, but the political undercurrent is more pointed.  Given that Turkey has been vying for full membership status in the European Union since at least 1995, treating Istanbul as the stage for a revenge plot highlights the liminality of Turkey’s status as a European nation.  While Taken establishes sex trafficking as a problem within Europe, Taken 2 takes the audience out of Europe proper to a zone whose status is undecided.  If the sheikh in Taken was seen as a voiceless Muslim outsider and the Albanian sex traffickers as uncompromising Muslim criminals, then what do we do with a nation of Muslims as the canvas for a repeat of that same revenge plot?

Taken 2 answers that question not by giving Muslims a voice — a critical flaw — but by attempting to clarify that the Albanian sex traffickers are as much outsiders in Turkey as they are in Europe proper, symbolically linking the two.  For an action movie that bangs the same drum, this might be a compelling cultural message, but the film undercuts this attempt at rectifying its predecessor’s overt bigotry in mere seconds:  Bryan discovers that the Turkish police are on the take, kills a police officer, and reduces the entire situation as one of unambiguous corruption by making the U.S. Embassy the only place the Mills family can hide (the U.S. Embassy is actually in Ankara, some 450 km east, though there is a consulate in Istanbul).  Whereas Jean-Claude (Olivier Rabourdin), here and in the first film, is granted the role of tragic victim, corrupt though he may be, every Muslim in Taken 2 is written off as either irrational criminal or criminally suspect, making Bryan and Kim’s rampage through the city — replete with thefts of vehicles and destruction of property — all the more disconcerting.

It’s this last concern that makes Taken 2 difficult to stomach.  Despite its intense action sequences and mostly serviceable camera work, features which would otherwise delight this action lover, Taken 2 just can’t let up, leaving me cold to the prospect of viewing the third installment.  Mindless action these films may try to be, but unlike the Bourne trilogy, the Taken movies are mired in the dangerous political rhetoric of our age without the wherewithal or desire to interrogate.  Surely, Luc Besson, et. al. can do better.

The Totally Pretentious podcast is licensed under a Creative Commons Attribution-NonCommercial-NoDerivatives 4.0 International License. The blog content is the sole property of their creators.